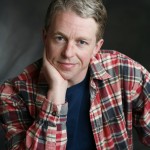 From the clown Touchstone in As You Like It to Prince Hamlet, Darragh Kennan has become known as an actor with a facility for Shakespeare’s language and a versatility to handle whatever role is tossed at him. Much of that comes from the 10 years he spent at American Players Theatre in Wisconsin where he started honing his craft right after graduating from college. After moving to Seattle in 2000, he and his family settled in the Columbia City neighborhood. When he’s not onstage, he’s often teaching or running New Century Theatre Company where he’s the co-artistic director. Darragh plays Octavius Caesar in Seattle Shakespeare Company’s production of Antony and Cleopatra, a character who marries his own sister off to Antony in order to futher his political ambitions of ruling the world. “It’s fun to play someone like that, because you have to figure out how they fit in. And what makes them do the things that they do.”

Reading
I’m reading a book called Just Kids, I think. It’s about Patti Smith and Robert Mapplethorpe. I recently read Cleopatra by Stacy Schiff to get ready for Antony and Cleopatra. I thought it was an awesome book. And before that I read a book called Lit which is a memoir about Mary Karr’s life. That’s what I’m reading. And I’m reading tons of plays, I’m always reading plays, but that’s work.

Listening
I listen to a lot of Beatles with my son, who is a huge Beatles fan. Beyond that, I just put Pandora station on the computer, usually I put Greg Brown in, and stuff comes up that I like.

Last play that made you cry
I have to cast my mind back a ways. A friend of mine, the guy who made me want to be an actor, and it’s actually a play that John Langs directed, it was an adaptation of Ian McKellen’s one man show In Acting Shakespeare. My friend adapted it and wrote it. It’s about his life in theatre. That made me cry. There was a moment in The Pitmen Painters at ACT where Joe McCarthy, this actor in town, delivers this monologue about being a coal miner. It was so well done. I was with my daughter, and he basically played the speech right to us in the audience, accidentally. Afterwards he laughed about that, but it was so moving. It was about this guy who was put to work as a kid, wasn’t able to play with his friends, and how he’d been in the coal mine for however many years. Never missed a shift. The way it was delivered by the actor, the writing, and the idea of being put to work in those kinds of conditions at a young age and being deprived of your childhood…and getting nothing from it. Yeah, that made me cry.

The last play that made you laugh
I went to Pullman Porter Blues at Seattle Rep with my daughter and absolutely had a blast. And I totally recommend it for people to go and see a totally different cultural, historical experience…to be entertained. I loved it, and so did my daughter, and that made me love it even more.

Dream project
Well, I feel like I’ve had dream projects. Doing Hamlet here with John, was a dream project for me and the way it turned out was beyond the best dream I could have had. You know we’ve been talking about doing Waiting for Godot; me, Chuck Leggett and George Mount, and that would be amazing. Doing The Dumb Waiter with Chuck Leggett and John Langs was a dream project for me, and I did it. I played Tom in The Glass Menagerie with colleague Aaron Posner, and that was a dream. I feel so fortunate to have realized these things. I played Edmund in Long Day’s Journey Into Night with John Langs. That was an amazing experience. But for things that I have actually not done yet, I would just always want to be in a room working with people I trust and love with a great piece of writing. I’d love to do The Iceman Cometh by Eugene O’Neill. I don’t think that will ever happen. I’d love to do Richard II. Basically it’s the cocktail of director and other actors and writing all lining up, and it rarely does. It rarely does. There’s always one thing that’s a little bit off. I’d love to do a film. I love film, and I never get asked to do films. It’s always theatre.

Morning routine
Most mornings we get up at 6 AM. My wife makes the kids’ lunch. I try and get dressed and get some coffee in me and get the kids out the door and get them to school. Then I usually have some time to work, and then go to rehearsal.

Inner sanctum
(Laughs) I don’t have one. Sounds like a good idea.

Best role so far
Hamlet. There have been some close seconds like Edmund in Long Day’s Journey Into Night, Tom in The Glass Menagerie. Artuo Ui in The Resistible Rise of Artuo Ui. The Maniac in Accidental Death of Anarchist. But Hamlet’s the best role.

Most frustrating role
I had to play a soldier in a production of Timon of Athens once. I had a big bazooka gun with a red point on it. We were climbing up and falling off things. It was sort of some young kid’s fantasy, but I’m not a gun person at all. We were in camouflage. It was the small role I was playing at the Shakespeare Theatre that year…and I hated it. I did almost everything I could to be present and a good scene partner and actor, but I really couldn’t stand it.

Hangout
Solo bar is where we all hang out and get a drink. And they’re awesome there.

Favorite place in Seattle
I love Golden Gardens in Ballard. I love going there, and we’ve gone there more this year than ever before. It’s a drive for us and kind of a hike. We swam there twice this year with the kids, and that’s a cool beach. I love that.

Favorite possession
I don’t really have anything great that I possess. I don’t know. Books? I got nothing really. If someone were to break into my house, they could take a computer and that would be about it.

Evening routine
If I’m home, we have dinner and then we go for a walk. Then we put the kids to bed and maybe hang out with my wife for an hour or so. Watch Parenthood! We just read books. Most of the time I’m gone in the evening.

On the bedside table
A collection of short stories that a friend of mine told me to read. Just Kids, the book I told you about. A plant. A lamp. And loose change.

Shakespeare Dinner party
Hmm… Constance from King John. I mean it’s not necessarily going to be a good dinner party, right? Just someone I’d like to talk to? I feel like she is the channel to how he experienced the death of his son. He, being Shakespeare. She just feels completely personal, at least in her grief, one of the closest impressions that we can get of what that guy might have been like. Let me think…well, why not: Hamlet. It’s really a depressing dinner party. (Take a moment) So actually, if I were having a dinner party, I wouldn’t invite Hamlet or Constance. But if I wanted to talk to people then Hamlet and Constance. And then Helena from All’s Well That Ends Well. That’s three, so there you go.

But… if it was a dinner party, like a fun dinner party, I think I would have Benedick, maybe Beatrice as well, and uh, Mercutio. They’d be fun. You’d be partying with them and entertained.