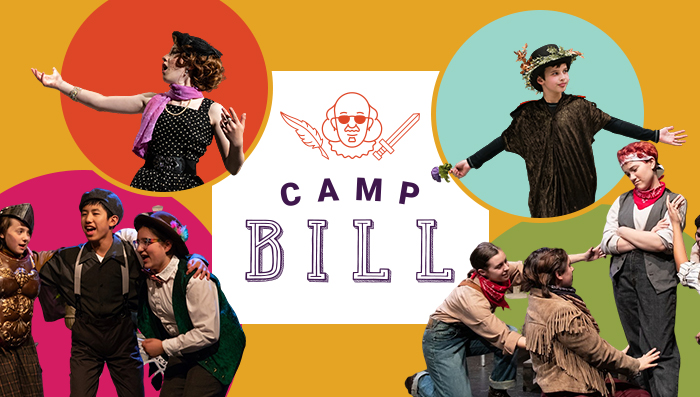 “A lot of English classes teach Shakespeare like it’s just a book that you read from. Experiencing it and watching it play out on stage is so different – that’s how it was meant to be shown. Camp Bill gives kids that experience of really living Shakespeare.”

Camp Bill is a series of fun and interesting programs offered every summer. Students can sign up for one-week acting camps where they will be introduced to Shakespeare’s works, practice basic acting concepts, and play fun improv games with new friends. They can also participate in a 3-week “production intensive” camp where middle and high school students create their own full productions. In these 3-week camps, teaching artists direct students not only in rehearsal and performance, but to design and build the set and costumes for their production! There’s something for almost every age and level.

In summer 2020, Production Intensive camps moved online and to create short films of Shakespeare’s plays. Students worked with teaching artists to practice the language and rehearse scenes as usual, but then scouted locations, created storyboards and shot lists, and filmed their scenes in socially-distant ways, ultimately stitching together their videos to create complete films.

Camp Bill 2021: Shakespeare in the Park

Join us for a “Shakespeare in the Park” style Camp Bill, an all-outdoors Shakespeare summer camp. We will be rehearsing scenes, learning monologues, playing theater games, doing some basic design work for our scenes, and having a Shakespeare-filled three weeks outdoors this summer at the beautiful Seward Park Amphitheater in southeast Seattle.

Camp Bill: Shakespeare in the Park

Please note: In the comments section during checkout, please include your student’s name and date of birth.

During camp, students will be split into groups of approximately 10-12 students for most activities, and smaller groups for scene work.

In the event of heavy rain, we may shift camp to being online-only for the day. For intermittent light rain, we will provide pop-up canopies for rain shelter and ask students to dress appropriately for the weather.

We’ll be adhering to the CDC and Governor’s guidance at the time of camp regarding mask-wearing, physical distancing, and other safety procedures. Our final sharing may be in person, or it may be video recorded to share virtually, depending on current safety recommendations. In the event that Seattle parks close to summer camps this summer, we will be moving this back to a virtual camp and refunds will be available.