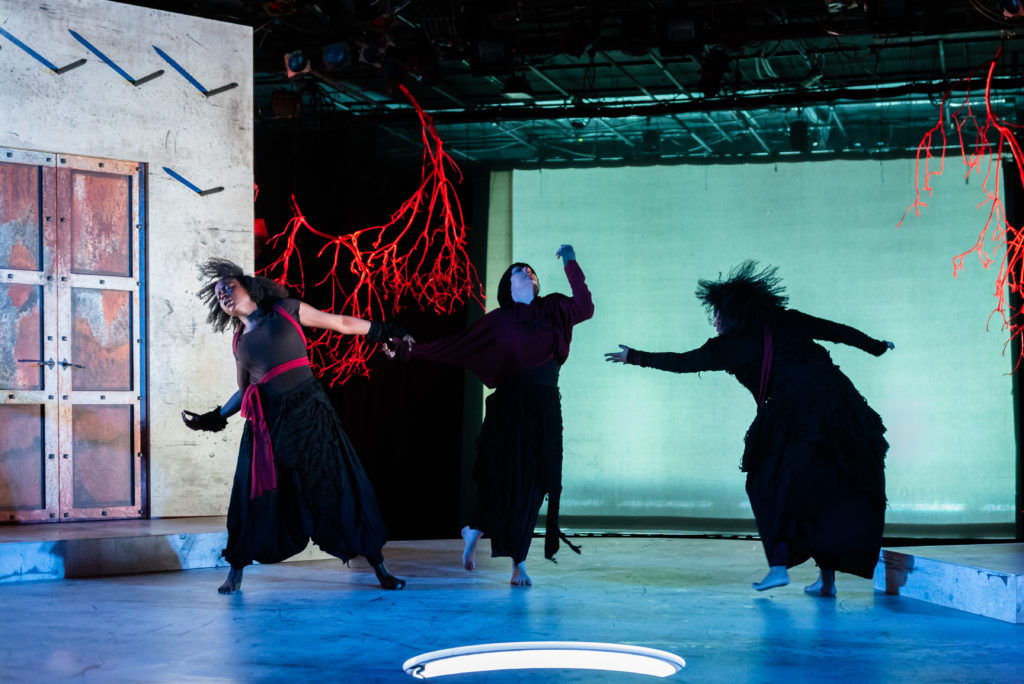 “The earth hath bubbles, as the water has,
And these (witches) are of them.”

…There is so much magic and witchcraft entangled with Macbeth that it has even developed its own superstition. When Shakespeare wrote it around 1606, shortly after Christopher Marlowe’s Doctor Faustus, it was part of a culture of witch-obsession led by King James himself. The name Macbeth is said to be cursed, actors practice rituals to make sure that bad luck won’t follow them, and it goes far enough beyond correlation that even news sources are willing to admit there is something ‘different’ about theater spaces.

When we look back as far as we can into our human past, we find the beginnings of what we call theater based in ritual. Ritual drama shows up across all cultures in antiquity. Scripts have not survived, but it’s believed they were generally unnecessary as these dramas might be a reenactment of a myth (such as a fight between a ruler and a monster; the disappearance, return, and sacred marriage of a young god; or wanderings in the underworld). A few paintings and reliefs seem to depict costumed performers; often they were priests or cult members, not professional actors. Masks discovered at religious sanctuaries certainly indicate the existence of religious performances. These rituals served two main functions: to teach and to memorialize.

So, on to the Greeks we go, because that’s where our Western theater stems, from the ancient festival of Dionysus—church service, story, and superbowl all rolled into one. It was a competition. It was for glory. It engaged ideals and mockery. It danced and sang.

We must also look to other ancient cultures, because this kind of storytelling belongs to the whole world. Ritual dramas in Egypt were held in temple complexes, even incorporating sacred lakes into the performances. In ancient India, Sanskrit theater held the presence of the gods and told stories to reveal and share aspects of Hinduism. Both an act of belief and a teaching tool, these stories were ceremonies. From the 14th century, the Nōh theater of ancient Japan drew its plots from legend, weaving in history, literature, and contemporary events with themes of dreams and supernatural worlds, all structured around song and dance.

As we move forward, closer in space and time to Shakespeare, we find the Miracle Plays moving out of a ceremonial space into a secular communal space (literally traveling around on carts), but still carrying the context from its predecessors: the myths and stories that connect our daily lives to those of the divine.

And now we’re in Shakespeare’s time, where the theater had moved into the yards of inns, surrounded by eating and drinking, travel and fellowship, we have come into a space of entertainment, and yet belief in the ritual power of these events was still strong. Actors dared not dress too much like their characters lest they be imprisoned for impersonating someone above their station. And Shakespeare came under much scrutiny for using something that was deemed to be an actual spell in Macbeth.

It is from that accusation (true or not) that much of the suspicion of a curse around the play itself stems. Read more from The RSC on the history of how a coven of witches cursed this show from the very beginning.

And be sure to chant a counter-spell when you are done:
“Thrice around the circle bound, evil sink into the ground.”
Just in case…