No Damsel in Distress: An Interview with Brenda Joyner 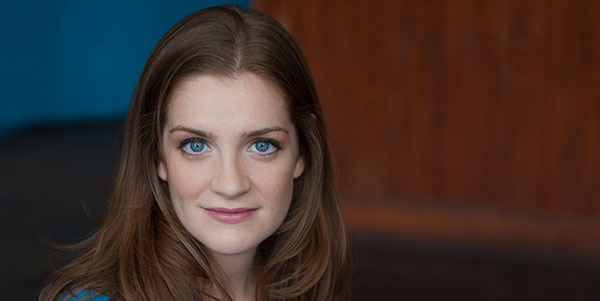 Although she’s played enough of them on our stage, Brenda Joyner is no damsel in distress. She’s a huge Seattle Sounders fan and admits to eating popcorn almost every day. Growing up in Anchorage, Alaska, she had designs on being a ventriloquist and asked for a Howdy Doody doll for Christmas. “I was immediately terrified of it. I tried to learn with the little booklet that came with it to teach you how to talk without moving your mouth, but the doll just totally creeped me out.” Even though she played Lady Macbeth at age 16, never in a million years did she think she’d be doing so much Shakespeare. She only took one class on him in college at Western Washington University.

Brenda is playing the role of the Queen in Seattle Shakespeare Company’s production of “Richard II.” This will be her second time working with director Rosa Joshi as she played Lavinia in the all-female upstart crow production of “Titus Andronicus” in 2012. We spoke with her during the run of “Much Ado About Nothing” while she was playing Hero and before rehearsals started up for “Richard II.”

Earliest Memory of Wanting to Be an Actor

When I was in third grade, the Missoula Children’s Theatre came to Alaska and we did “Alice in Wonderland” in a week. At the end, I remember we were all sitting in the front row of the theatre and the two instructors with Missoula Children’s Theatre were saying goodbye and talking about their next project. I said some inappropriate comment for a third grader… a very inappropriate comment about hanky panky behind the curtains or something like that. I don’t know where it came from, but then everyone laughed, and I was filled with the most glorious feeling in the world. I remember thinking, “I want to make people laugh. I want to feel this way for the rest of my life. I want to make people laugh and feel things for the rest of my life.” There is no better feeling in the world than that. And I fail at it mostly, but I just remember I was sitting there and I couldn’t believe that everyone was laughing at something that I said. And I just wanted to feel that way for the rest of my life. To make someone laugh…to make someone feel something. It’s the greatest.

What I love about playing ingénues…so often you people talk about them being thankless roles. Especially Hero, having done Hero again, it really dawned on me how little she says and how much people speak for her. They always say “Hero said…” and she’s standing right there on stage! It just presents such an interesting challenge. Just because you’re not talking doesn’t mean you’re not feeling things or experiencing things. You still have opinions about what’s happening on stage, so it just opens up this whole other world of portraying that. And I think they can be funny. I think they can be charming and endearing…especially with Hero. Claudio and Hero meet, you can give them a back story if you want, but they meet and suddenly he’s in love with her. And so I try to think, okay, what’s this thing that he falls in love with, and for me that’s her humor. That’s what’s endearing and charming to me. So I try, as much as I can, in the limited stage time you have as a Shakespeare ingénue, to be charming and funny and heartfelt, and real. You just can’t write them off

On Playing a Queen

Playing a Queen?! Good God! I honestly didn’t think there was any part for me in Richard, and then I was talking to Amy [Seattle Shakespeare Company’s Casting Director]. She said, “Well, there’s the Queen…” The Queen? Oh I’m not…God! That’ll be challenging! I don’t know what silly face I can make when playing a Queen. Ugh. I’ll have to work in some fart jokes somehow. She has like three scenes, right, and really only one, so you better make it count.

On Working with Rosa Joshi

She’s phenomenal. She’s so smart and exciting and daring and crazy. I’m so thrilled that she’s working at Seattle Shakespeare Company. I’m really happy for her, and I can’t wait to work with her again. She’s just…she’s like Sheila Daniels, such a strong female director. She’s just a brilliant director, but then as a woman she has this great female voice. I can’t wait to work with her on the Queen. I could use her help a lot. She has fantastic ideas and she’s game for anything. It’s going to honest and real, because that’s just what Rosa does. The way that she approaches shows is so different. It’s hard to explain, but…yeah she’s awesome.

I would love another crack at Lady Macbeth. Not that my performance at age 16 was shabby. I would love to play that one. And I think, especially since it’s so fresh in my brain, I would to play Beatrice. I love her humor, I love how…there’s just so much that I identify with in Beatrice. In her use of humor and wit as a way of life and a defense mechanism, and a thing to hide behind. So I would love a crack at that. And I’ve had the pleasure of watching two phenomenal Beatrices. So, I could just steal everything they’ve done.

I would love to do a comedy and be funny. Rather than trying to shoehorn my comedy into these dainty little ingénues.

Must Haves for Her Dressing Room

Bourbon. Bourbon and a pair of slippers. Those are my only go-to things. I don’t need pictures …if people give me cards throughout the run, I’ll keep them all there, but those are the only two things that I need, a pair of slippers and bourbon. And mascara! Three things. I can do anything without makeup, but I have to have mascara! Mascara, bourbon, and my shark slippers. They are shark slippers. They’re my show slippers. They’re simple little slippers, but the front is like a big toothy mouth. People think it’s a whale… it’s not a whale, it is a villainous shark, and it has little flippers. I found them at Target. I love sharks…well, no I don’t. I love them because I’m terrified of them. I have this love hate relationship with them. “Jaws” is my favorite movie and I just think sharks are terrifying things. I respect them and I stay out of their water. I also have shark footie pajamas at home.