Bluff Your Way Through the Play: King Lear 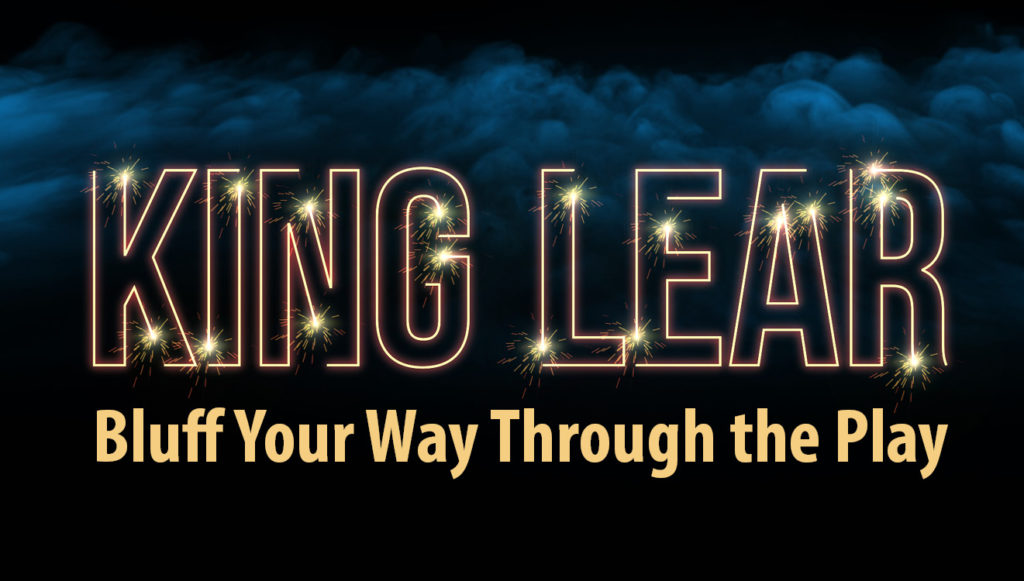 Family betrayal, sibling rivalry, greed, insanity, bloody violent acts, and estate planning. What’s not to like about King Lear? If this is your first go around with Shakespeare’s famous and popular tragedy or if you just want a brush up to know your Kents from your Cornwalls then we’re here to help out.

Early published versions of King Lear (First Quarto, Second Quarto, First Folio, and Second Folio) vary widely. Nearly 300 lines differ between the texts printed between 1608 and 1632. Does it matter? Sure it does! In some cases the last lines of the play were given to different characters. Most modern texts of the play combine the versions, but having options for performance can make things interesting.

In Elizabethan England there was a fairly famous Celtic tale of an ancient King Leir of Britain who had three daughters. Shakespeare likely elaborated on the already established stories of the king, but embellished heavily by adding the Fool, peppering it with violence and madness, and giving his version a tragic ending.

Robert Armin was the resident comedian in Shakespeare’s troupe. He inaugurated the roles of Feste, Touchstone, and Lavatch. It’s believed that Shakespeare created the part of Lear’s fool specifically for Armin, since the source material for King Lear doesn’t mention a fool.

In 1642 Poet Laureate Nahum Tate rewrote several of Shakespeare’s plays…and gave them happy endings! In his version of King Lear Cordelia marries Edgar and cares for her father until his death. And he eliminated the Fool! Tate’s version was so popular that it continued to be performed for over 200 years until Shakespeare original was restored and revived by actor Charles McCready.

With Goneril and Regan often compared to deadly and vicious creatures King Lear contains more references to animals and the natural world than any other Shakespeare play.

From 1810 to 1820 during the reign of George III, all productions of King Lear were banned from the stage. The monarch suffered bouts of insanity and they didn’t want the public to see the parallel between Shakespeare’s mad king and Britain’s ruler.

We Are Family…I Got All My Sisters and Me

While it can be viewed as a political drama about rights and lands and leadership, King Lear is a family story with nearly all the main characters related by blood or through marriage. Even the subplot of Lear’s friend Gloucester revolves around family relationships.

Shaw Loved It. Tolstoy Hated It

In his preface to Three Plays for Puritans, George Bernard Shaw said of King Lear that “No man will ever write a better tragedy than Lear.” Leo Tolstoy, author of War and Peace, begged to differ. In his 100 page essay on Shakespeare the Russian author said King Lear had an “exaggerated” plot with “pompous, characterless language.”

When asked if he had any tips on playing the role of Lear, actor Donald Wolfit is credited with saying, “Get a Cordelia you can carry and keep an eye on the Fool.”

So, just what happened to Queen Lear? Where is she? Why isn’t she mentioned? The practical reason is that fewer women’s roles were written because women weren’t allowed to act on stage. The female roles written were often played by younger actors and there were only a few boy actors in a company at a time.