Bluff Your Way Through the Play 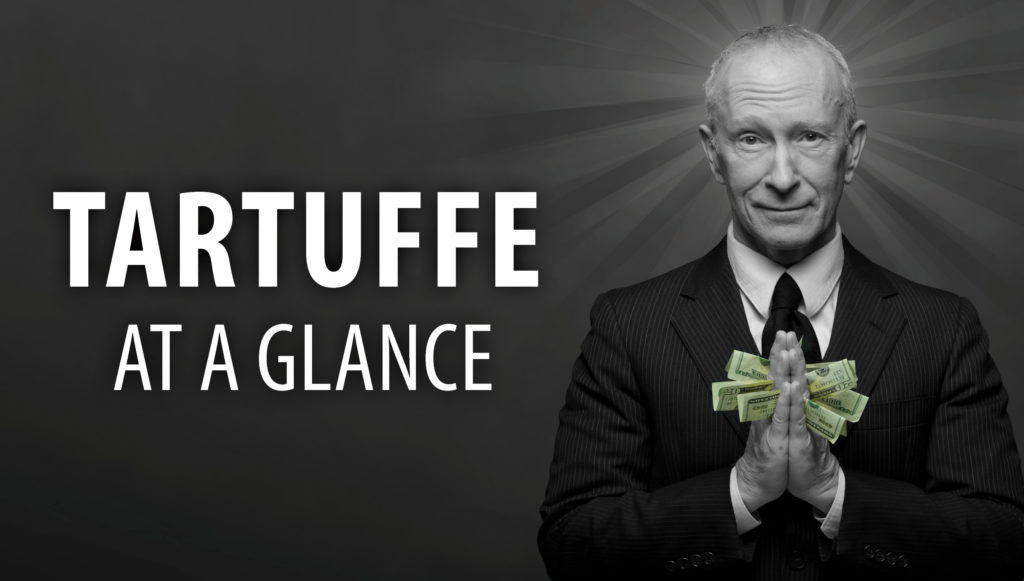 Impress your friends! Wow your neighbors! Show off your smarts! Here is a handy guide for getting up to speed on Tartuffe.

Um…how do you say that?

The first step in sounding like you know what you’re talking about is to say the title of the play correctly.

The name Tartuffe means “truffle,” but not the chocolate kind. A truffle is an underground fungus prized by foodies for its delicious aroma (and it’s thought to be an aphrodisiac).

Read more about the meaning of Tartuffe

Molière, the author of Tartuffe, is a stage name. His given name is Jean-Baptiste Poquelin. It was common practice for French actors to assume a stage name. And, since his prominent father disapproved of his profession, it was likely Molière’s way of saving them him embarrassment of being associated with an artist for a son.

Just who was this guy?

Playwright. Actor. Legend. Molière is one of the greatest masters of comedy. His best known works in addition to Tartuffe are The Misanthrope, The School for Wives, The Miser, The Imaginary Invalid, and The Doctor in Spite of Himself.

Molière and his acting company were in tight with the court of King Louis XIV. They created the official court entertainments and wowed Parisians with their productions.

Ironically, Molière bit the dust while playing the main character in his final play The Imaginary Invalid. He was done in by a coughing fit that led to bleeding. He finished the performance, but died a few hours after the show.

Orgon, a father and gentleman, has taken a boarder, Tartuffe, into his household. Tartuffe claims to be a holy man, but seems to have only convinced Orgon and his mother. The rest of the household thinks he has ulterior motives, mainly taking Orgon for all he’s worth.

Orgon gets so caught up in Tartuffe’s charms that he disinherits his own son and breaks his daughter’s heart by promising her hand in marriage to the swindler. Even though Orgon is blind to Tartuffe’s shenanigans, the family hatches a plan to expose Tartuffe and catch him red-handed. They do. Orgon sees Tartuffe for who he is and orders him from the house. Tartuffe turns the tables and threatens to evict the family. It’s only after the king intervenes at the very last minute that justice is served.

If you can believe it, this famous comedy was banned after its first public reading in 1664. The clergy thought Molière was attacking religion. Molière insisted he was mocking religious hypocrisy, not religious belief. Who are you going to believe? Under pressure, King Louis had no choice but to outlaw performances of the play. Molière wasn’t down yet. He re-wrote, re-named the play, and tried again. No luck. The play got shut down after a single performance. It took five years of begging the king for permission to perform the play before he finally relented. Once opened the public was crazy mad for Tartuffe and it has been making folks laugh ever since.

A Poet and I Know It

Tartuffe was originally written in 1,962 twelve-syllable lines of rhyming couplets. Crazy, I know! Who thinks of doing something like that? Um…rappers do that. You’d think it would be tough to listen to, but you get used to it pretty quick.

Hey! Where are the powdered wigs?

No lace and powdered wigs here. Our production of Tartuffe is set in 1947. This post-war period was a time when several new fringe religions appeared in the US. Tartuffe in this production belongs to an undefined religion, with a made-up symbol drawn both from religious icons and currency symbols.

The play takes place over the course of one day, beginning in the morning and running late into the night. Watch how the lighting in the play changes over time (bright, sunny morning) and as Tartuffe meddles with the family more and more, the light begins to take on the feeling of film noir, with long shadows creeping across the stage.

Up Your Smarty-pants Game