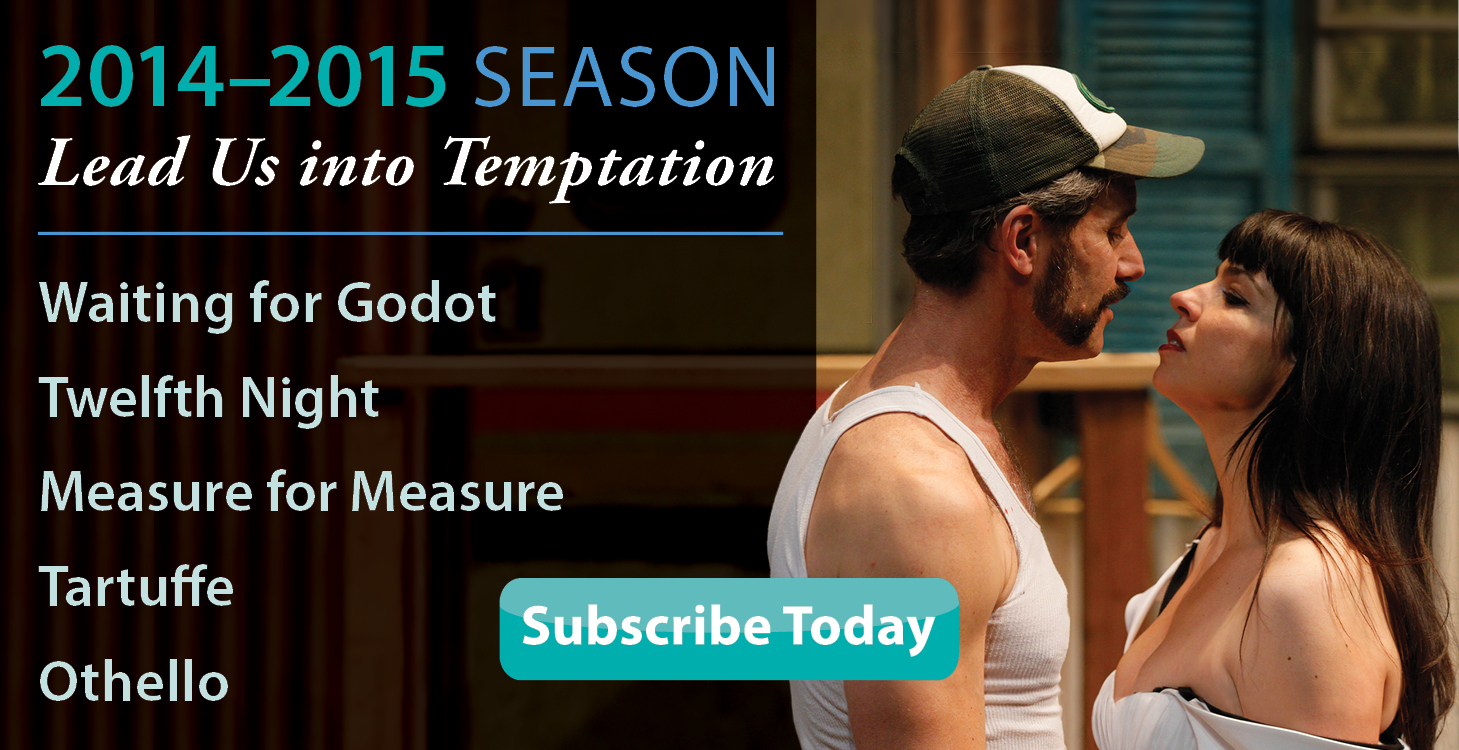 Artistic Director George Mount announced the company’s plans for 2014-2015 that include expanding to five plays for its indoor season, the return of directors Jon Kretzu and John Langs, and the mainstage directing debuts of Desdemona Chiang and Makaela Pollock.

“Many of the projects in this coming year have been in the works for several years,” said Mount. “It was really a matter of timing and getting the right pieces in place. For the indoor season, the plays coalesce around the theme of ‘Lead Us Into Temptation’ since desire, both playful and sinister, are a factor in each show.”

The free, outdoor Wooden O shows for summer 2014 will be The Two Gentlemen of Verona directed by David Quicksall and Julius Caesar directed by Vanessa Miller. “Both David and Vanessa are Wooden O veterans, and they know the demands it takes to create a great experience in the parks,” said Mount. The Two Gentlemen of Verona will draw its setting from mid-century America while Julius Caesar will feature an all-female cast set in a contemporary world on the brink of war. The shows will start performances on July 10, 2014 and perform in parks at Mercer Island, Sammamish, Seattle, Lynnwood, Edmonds, SeaTac, Issaquah, Shoreline and other cities. All performances are free and open to the public with donations encouraged at the site. After their run in Seattle, each show will transfer to Walla Walla for a week of performances.

Seattle Shakespeare Company expands its indoor programming next season by adding a fifth full production to its roster. Samuel Beckett’s Waiting for Godot will be produced at the Falls Theatre at ACT Theatre September3-21, 2014. “Godot is a play I’ve wanted to direct for a long time, and I specifically wanted to direct it at ACT,” said Mount. “I’ve been working for almost three years with a group of artists to help realize this production, and I’m very excited that we can kick off our indoor season with this play that could arguably be the most influential play of the 20th century. And, we’ve got some very exciting city-wide partners and events related to Beckett in the works.” Samuel Beckett introduced the world to Vladimir and Estragon in Waiting for Godot when much of humankind lived in fear of nuclear annihilation. Since then these two clowns, as well as their fellow travelers Pozzo and Lucky, have led the way in taking one falteringly dangerous step after another into an unknown future.

Shakespeare’s sparkling comedy Twelfth Night will be directed by Jon Kretzu October 21-November 16, 2014 at the Center Theatre at Seattle Center. “I’m so happy to welcome back Jon who showed us the charm and delight in Love’s Labour’s Lost in 2013,” said Mount. “I know he’s interested in playing with both the twinkle of Twelfth Night as well as the darker tones of the play.”

Desdemona Chiang will direct Measure for Measure January 6-February 1, 2015 at the Center Theatre at Seattle Center. “Desdemona is an artist whose work really caught my attention, and I look forward to introducing her to our fans,” said Mount. “Measure for Measure is a play that raises hard questions and doesn’t provide any easy answers, and I’m counting on Desdemona to hold us to the fire for this one.”

Moliere’s Tartuffe will be directed by Makaela Pollock March 17-April 12, 2015 at the Center Theatre at Seattle Center. “Tartuffe is a crazy tale of a swindler who cons his way into a family’s household, and Moliere skewers false morality with great gusto,” said Mount. “I worked with Makaela for the 2012 Wooden O production of Twelfth Night, and I think her zany sensibilities will be spot on for the play.”

Othello will be the final play in the company’s indoor season. It will be directed by John Langs April 22-May 10, 2015 at the Cornish Playhouse at Seattle Center. “John doesn’t shy away from bringing a big vision of Shakespeare’s plays to the stage,” said Mount. “Time and time again he’s wowed our audiences, and I can’t wait see what he’ll bring to bear on Othello since it’s a firecracker of a play.”

Seattle Shakespeare Company will also tour two 6-actor Shakespeare productions to approximately 60 schools and communities across Washington State in the spring of 2015.