Bluff your way through the play: Mrs. Warren’s Profession 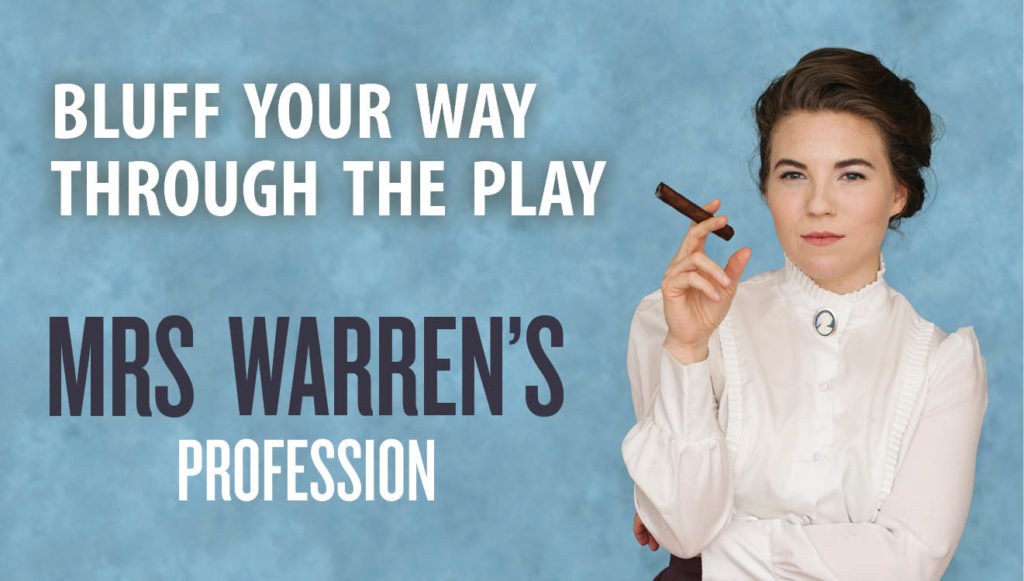 George Bernard Shaw had been writing criticism for years, but had only started trying his hand at playwriting a year before he wrote Mrs. Warren’s Profession. It was his third play. He wrote to actress Ellen Terry, “It’s my best play; but it makes my blood run cold: I can hardly bear the most appalling bits of it. Ah, when I wrote that, I had some nerve.”

The Man Was Non-Stop

While probably best known for his plays – Arms and the Man, Pygmalion (later made into the musical My Fair Lady), Heartbreak House, St. Joan and more than 50 others – George Bernard Shaw was also an essayist, critic, vegetarian, and campaigned for the simplification of spelling. Throughout his entire life he remained active and engaged in a variety of causes and pursuits that centered on injustice, poverty and the status of women. Awarded a Nobel Prize for Literature in 1925 and an Oscar for Pygmalion in 1938, Shaw died in 1950 at age 94.

Banned from the Start

Anticipating that Mrs. Warren’s Profession would be refused a production by national censors, Shaw wrote a cleaned up version of the play.  He omitted the entire second act and made Mrs. Warren into a pickpocket instead of a brothel keeper.

In the Victorian era, public morality got strangely intertwined with public health and sanitation. While prostitution was not illegal in Victorian times, working-class women were subject to arrest, mistreatment, and forced examination under the arcane and controversial Contagious Disease Acts passed in the 1860s. Their clients were not subject to the same scrutiny. Sex work was relatively lucrative. It provided an alternative to the other work (usually poorly paid) that was available to women. Public opposition to the Contagious Disease Acts inspired some of the first women’s rights reformers.

The latter part of the 19th century saw expanding rights and opportunities for women. The suffrage movement gained momentum, and the Married Women’s Property Act permitted women to keep all their earnings and hold property in their name.  The time also saw the rise of the “new woman.” Young, well-educated women shrugged off strict Victorian expectations for dress and decorum, and delighted in independence. They wished to support themselves and sought out meaningful work. A subject of much discussion, they blurred the line between the sexes for Victorians but forged a path for opportunities for women.

Newly graduated from university, Vivie Warren is eager to start her career in finance. Having spent most of her time in boarding school apart from her mother, Vivie is determined to find out why her mother is so secretive about her life and her business. She won’t even tell Vivie the name of her own father. While staying at a cottage with her mother, Vivie starts flirtatious friendship with a local young man, Frank Gardner. When Frank’s father, a clergyman, and Mrs. Warren meet by surprise, they realize they knew each other long ago under very different circumstances. Reverend Gardner tells Mrs. Warren that he will not allow his son to marry Vivie due to Mrs. Warren’s shameful past.

When Vivie finally gets her mother alone Mrs. Warren’ reveals that she entered into prostitution in order to escape a life of poverty and hardship. She said that society gives women very few choices for their future: become a wife or suffer economic hardship. Mrs. Warren said she found a different way that let her lead a life of her own design and choosing.

Vivie takes in what her mother shares about her life and gives her a great deal of admiration for her choices. But the newfound respect is short lived after Vivie learns that her mother is still running her very profitable business.  She is the primary beneficiary of this business.  Shock, anger and denial lead to a final showdown between mother and daughter.

Mrs. Kitty Warren – Vivie Warren’s mother. Seen at the first as spoilt, domineering, and somewhat vulgar but, eventually revealed as a smart, if somewhat manipulative, mother and business woman.

Mr. Praed – Mrs. Warren’s friend. Something of the artist about him. Unconventionally, but carefully dressed. Very amiable with considerate manners.

Rev. Samuel Gardner – Frank Gardner’s father. A clergyman who clamorously asserts himself as father and clergyman without being able to command respect in either capacity.

The great thing about language is that it’s always evolving. Here is a selection of words and terms used in Mrs. Warren’s Profession that you might not be familiar with or that may have an alternate meaning than the one you know.

devilling: doing work for another who then takes credit and/or remuneration.

high Cambridge degree: in 1881 women received permission to take exams at Cambridge University. They did not receive the same degree as the male students even though they did the same work. Women were granted titles instead of degrees. Cambridge started granting degrees to women in 1948.

off my peck: not hungry; a slang for food ; if one is peckish, one is hungry.

public-house: an inn or tavern providing food and lodging for traveling public, usually licensed to sell ale and wine; also used to describe a brothel in the 18th century.

whitelead: a heavy poisonous basic carbonate of lead that is marketed as a powder or as a paste in linseed oil, has good hiding power and is used chiefly in exterior paints.

workhouse: Parliament passed the Poor Law Amendment Act, 1834 provided the building of workhouses for the poor which were intended to be harsh and hostile so that only the truly destitute would seek refuge in them.

wrangler: named from the style of argument at a defense/thesis; one engaging in argument or debate.